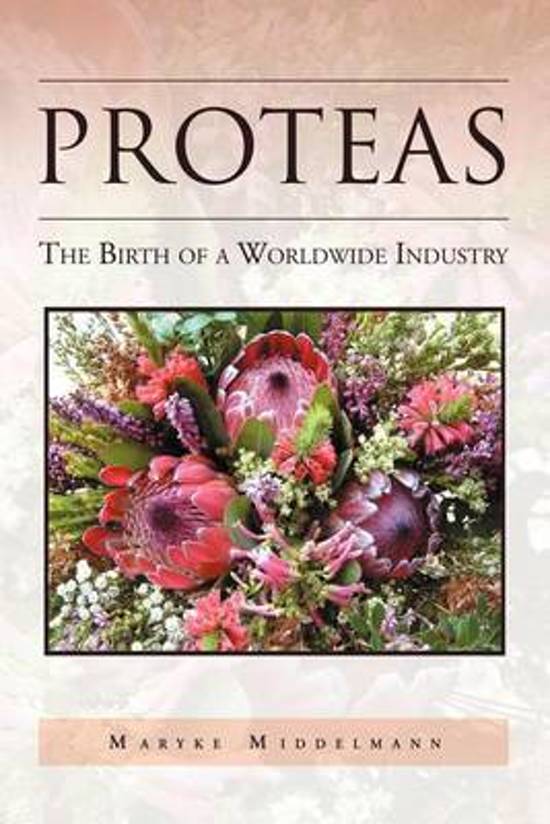 Book Review: Proteas - The Birth of a Worldwide Industry

Proteas – The Birth of a Worldwide Industry by Maryke Middelman

This well-researched and revealing guide to the commercialisation of proteas and greens from the Cape Floral Kingdom is a well-nigh exhaustive and fascinating reflection on the troubles involved in giving simultaneous multiple birth to turned, feet first, babies, in seed trading, gardening/landscaping, dry and fresh flower and foliage industries. With not only the babies, but their bodily parts themselves also being obnoxious (difficult to cultivate, transport, and full of pests), yet held in high esteem, due to being of royal blood. They are the dominant, prettiest, and most visible partners in the smallest, most threatened biome in the world. The flowers of plants in the Fynbos have always been available (from nature), with the markets, too, always having wanted them – Maryke’s early history extracted from Walther’s library clearly demonstrates such – albeit that the availability was the easy, fun part – basically amounting to the fertilising of the egg. As the title of the work Proteas – The birth of a worldwide industry states, the story that is unfolded herein is mainly about the protracted birth and, finally, the revolt of the youngest sibling.

Satisfying hobbyists who only focus on this particular enterprise for the love of the baby, entrepreneurs trying to make a living therefrom – whether from exploiting or educating the baby, conservationists who preach a hands-off approach and natural rearing and evolution in relation to the flowers, and customers trying to satisfy their fickle consumers thereby, combined, are unlikely to encounter a trouble free household, due to its complexity. All such endeavour occurs in a politically-charged environment of alleged repression / exploitation of labour that is still further troubled by fears that the crown jewels may be lost, or that they might be destroyed by over harvesting. To me, Maryke’s listing of all the enthusiasts who were involved in the standby team is pre-eminent in its highlighting of the multiple
philanthropic roles that they played, while regarding Walther as midwife, which is a role that she herself later was elected to assume, and which she accomplished with great aplomb and commitment.

Proteas – The birth of a worldwide industry also clearly demonstrates that the more things change, the more they stay the same, with some of the earliest problems relating to transport costs, lack of information regarding cultivation practices, unreliable freight partners, insect infestation and quality concerns giving rise to an intense desire for cooperation among interested parties from all corners of the earth. The issues raised are still some of the major concerns that frequently appear on the agendas
of industry-related organisations. Proteas – The birth of a worldwide industry has all the more value since it tracks the industrial development of what is possibly one of the newest floricultural products in
the world, as well as illustrating the commitment and leadership skills that are required from many of those who are involved. Of special interest is that the country of origin was constantly being accused of being the weakest link in the production chain, with wonderful successes being reported back by travelers from all over the world. Fortunately, the country concerned turned out to be the leading producer of quality plantation-produced protea flowers in the world, which was largely made possible through usage of the information that was accumulated during the production process initiated by the audacious pioneers.

Maryke’s role was, unfortunately, completed before the process came to fruition, due to one of the teenagers wishing to leave home. As a consolation to Maryke, it does seem that he/she is more reliant on his older siblings than he thought, and is currently courting them vigorously. Well done, Maryke, I thoroughly enjoyed the inspiring and informative read. 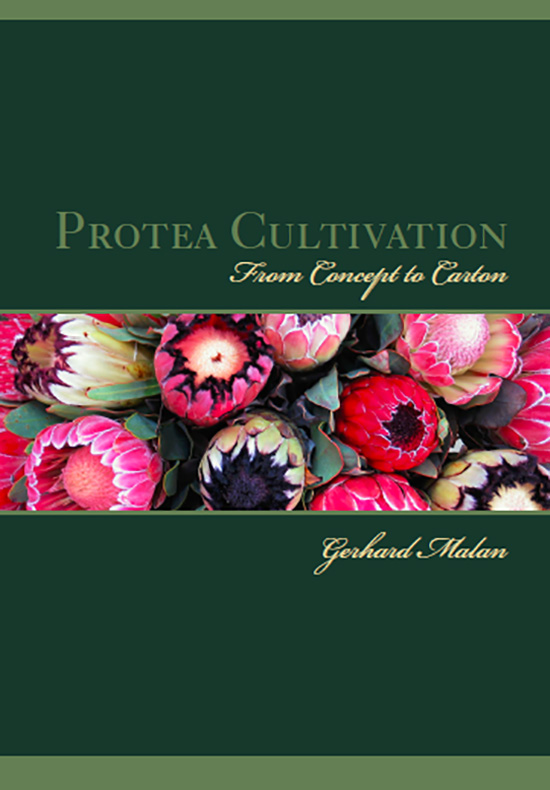 Protea Cultivation – From Concept to Carton By Gerhard Malan

This is a long awaited book on the A to Z of fynbos (Protea) production. Although the major focus is on production and cultivation practises in South Africa, the author Gerhard Malan has drawn on his experience as a consultant in Portugal and Spain amongst others to also include cultivation practises
in these regions. The 298 page book is made up of 13 Chapters that flow in a logical sequence. A brief history of Protea cultivation is followed by a very practical chapter dealing with the various factors influencing decisions on whether to cultivate Proteas (and with which cultivars). A well
thought out section deals with the marketing aspects and pitfalls linked to this cultivation. The Chapters dealing with the actual cultivation, environmental requirements, preparing the soil, plant propagation as well as the care and fertilisation and irrigation program are based on sound scientific principles. What is also refreshing is that where scientific research is lacking, the author has included information gleamed from his 30+ years’ experience in this industry. The author also makes use of
selective colour figures (Photos) to illustrate his points; this ensure a visual presentation which makes the implementation of his suggestions so much easier. Aspects that are discussed also include programmes and strategies employed to manipulated flowering time. Following the
cultivation chapters, a whole section is dedicated to the harvesting and post-harvest care of the flowers. Attention is also given to important practical aspects that need to be addressed to ensure a long vase life. The various diseases and pests that may occur and their control are discussed in depth.

Very good colour illustrations are included which will allow the producers to diagnose the problems easier. The final chapter of the book is a compilation of the key cultivation factors (including colour plates) on the major varieties grown and marketed. These cultivation factors include soil requirements, growth rates, diseases and vase life expectations; a very nice quick reference guide. The book ends with a set of four Appendices for soil, water and leaf analysis; Agrochemicals; packaging rates and harvesting stage; and then a handy section containing the contact details of supporting organisations. The final Appendix contains selected scientific references. One area where the book is lacking is with regard to in-depth information on the wild harvesting and drying of fynbos products.

Overall, this book is must have for any prospective or practising Protea farmer, both in South Africa and internationally. The book is also suitable for any under graduate course in fynbos cultivation and it is further recommended that any post graduate student wishing to conduct research on
Proteaceae spp. should read this book to gain insight into the industry and the phenology, cultivation and marketing of these unique and indigenous floricultural species.

This book is a must read for any newcomer to the commercial fynbos industry. Every little detail of practical fynbos farming is discussed and 20 years’ experience is shared in laymen’s terms. Even though it is written in plain and simple language the facts are based on proven research or on-farm
trials and applicable to modern day scientific farming. In relation to other crops such as fruit or vines the fynbos industry has limited knowledge resources which are often difficult to access, making this all-in-one guide a very unique and valuable resource to the South African fynbos industry. Even producers and extension officers in other countries with different climatic and soil conditions will find this guide very useful in explaining the rationale behind many of the principles used in fynbos farming.